“The most compelling American group to come on the scene ”

Described as “power players” by The Los Angeles Times, the Horszowski Trio has performed to sold-out houses and critical acclaim across the United States and around the world. For their Morris Museum debut they will play a program that probes the depths of our humanity through three pieces including the U.S. premiere of Louis Karchin’s “Trio for violin, cello, and piano”.

The Trio has chosen two pieces that live in highly emotional frameworks for their first performance of Karchin’s new work. This program is a conversation between the past and the present, both musically and geo-politically.

In March 2019, the Horszowski Trio made its London debut in a sold-out concert presented by Wigmore Hall. In the same season, they also appeared at the 92nd Street Y in New York City; the Kimmel Center in Philadelphia; Schubert Club in Saint Paul, Minnesota; Spivey Hall in Atlanta; Bowdoin Music Festival in Maine; UCLA in Los Angeles; Dresden’s Moritzburg Festival (Germany); and venues in Boston, San Francisco, Canada, and Japan, among others. In addition, they released a recording of the complete piano trios by Robert Schumann on AVIE Records, receiving tremendous acclaim: “great care and affection” (BBC Radio); “intoxicating” (Gramophone); “exciting and deeply felt” (Strings); “fresh, supple and fantastic” (The Strad).

The Trio takes its inspiration from the musicianship, integrity, and humanity of the pre-eminent pianist Mieczysław Horszowski (1892– 1993); the ensemble’s pianist, Rieko Aizawa, was Horszowski’s last pupil at the Curtis Institute in Philadelphia. Described as “power players” by the Los Angeles Times, the Horszowski Trio’s repertoire includes works by many of the composers with whom Mr. Horszowski had personal interaction, including Gabriel Fauré, Enrique Granados, Bohuslav Martinů, Maurice Ravel, Camille Saint-Saëns and Heitor Villa-Lobos. The Horszowski Trio’s debut recording – an album of works by Gabriel Fauré, Camille Saint-Saëns, and Vincent d’Indy on the Bridge label – was released in 2014 and dedicated to the memory of Mieczysław Horszowski.

The Morris Museum has adopted a dynamic mask policy for upcoming events in the Bickford Theatre. Face masks are currently optional in the CENTER and HOUSE RIGHT sections (indicated in blue) and are required in the HOUSE LEFT section (indicated in red). Face masks are currently optional for Children’s Theatre performances. This policy is subject to change at any time. Please check back on our website or call the box office for our current policy before your scheduled performance date. For assistance, call the box office at 973-971-3706. 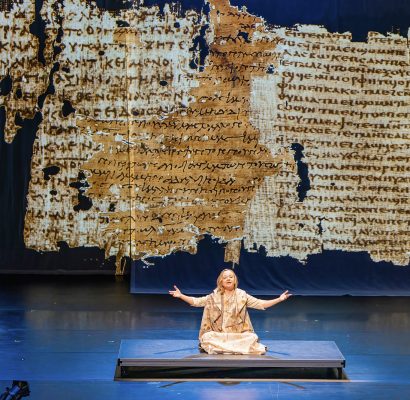 see more
I am the utterance of my name: Divining Mary Magdalene
November 4, 5, and 6 see more
Orpheus & Angela Hewitt
November 16, 2022 | 8 PM
We use cookies on our website to give you the most relevant experience by remembering your preferences and repeat visits. By clicking “Accept All”, you consent to the use of ALL the cookies. However, you may visit "Cookie Settings" to provide a controlled consent.
Cookie SettingsAccept All
Manage consent